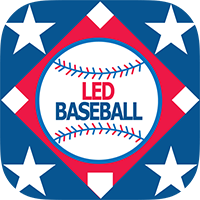 Pitch, hit and run the bases with the only electronic baseball game for your iPhone, iPod Touch and iPad.

Beat the computer or a friend! Hit a homer!

The speed and excitement of real baseball.
It’s you against a built-in thinking computer.
A challenge for fans of all ages.
A whole new kind of fun.

• 5-Innings of Baseball
• Computerized Scoring
• Computer controls pitching and plays defence
• You control hitting and base running
• Play Two-Players Against a Friend
• Full Electronic Sounds Included
• You swing away at a fast one, hit a curve, stretch a single, even hit a home run!

Plenty of excitement awaits you, so PLAY BALL!!